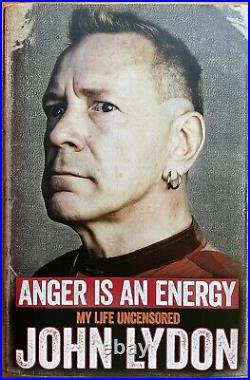 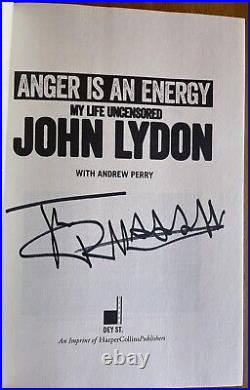 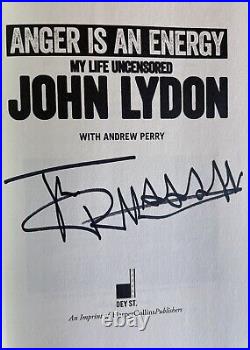 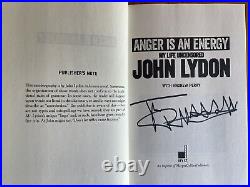 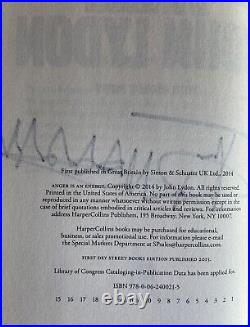 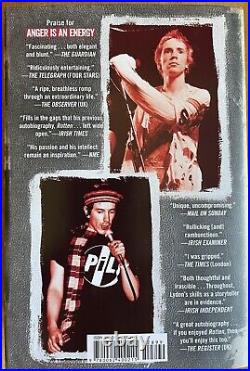 SEX PISTOLS SINGER JOHN LYDON (JOHNNY ROTTEN) SIGNED BOOK FIRST EDITION. His book, Anger Is An Energy, My Life Uncensored, signed on the title page. Obtained in-person by the owner of The Inkwell Autograph Gallery in Brooklyn, NY. WILL PROVIDE OUR COA. John Joseph Lydon /’la? N/; born 31 January 1956, also known by his stage name Johnny Rotten, is an English singer and songwriter. He is best known as the lead singer of the late-1970s British punk band the Sex Pistols, which lasted from 1975 until 1978, and again for various revivals during the 1990s and 2000s. He is also the lead singer of post-punk band Public Image Ltd (PiL), which he founded and fronted from 1978 until 1993, and again since 2009. Lydon’s outspoken personality, rebellious image and fashion style led to his being asked to become the singer of the Sex Pistols by their manager, Malcolm McLaren. With the Sex Pistols, he penned singles including Anarchy in the U. “, “God Save the Queen”, “Pretty Vacant” and “Holidays in the Sun, the content of which precipitated what one commentator described as the’last and greatest outbreak of pop-based moral pandemonium’ in Britain. [1] The band scandalised much of the media, and Lydon was seen as a figurehead of the burgeoning punk movement. [2] Because of their controversial lyrics and disrepute at the time, they are regarded as one of the most influential acts in the history of popular music. After the Sex Pistols disbanded in 1978, Lydon founded his own band, Public Image Ltd, which was far more experimental in nature and described in a 2005 review by NME as’arguably the first post-rock group’. [5] The band produced eight albums and a string of singles, including “Public Image”, “Death Disco”, and “Rise”, before they went on hiatus in 1993, reforming in 2009. In subsequent years, Lydon has hosted television series in the UK, US, and Belgium, 2004 appeared on I’m a Celebrity… Get Me Out of Here! In the UK, appeared in advertisements on UK television promoting Country Life, a brand of British butter, written two autobiographies, and produced solo musical work, such as the album Psycho’s Path (1997). In 2015, there was a revival of a 1980s movement to have Lydon knighted for his achievements with the Sex Pistols, although he has declined efforts to award him an MBE for his services to music. [6] Q magazine remarked that’somehow he’s assumed the status of national treasure’. [7] In 2002, he was named among the 100 Greatest Britons following a UK-wide vote. CELEBRATING 26 YEARS IN BUSINESS! PLEASE DO NOT WASTE OUR TIME BY WINNING AN ITEM AND NOT PAYING FOR IT!! Terms of Sale: PLEASE READ! All items are guaranteed authentic. The Inkwell Autograph Gallery. This item is in the category “Collectibles\Autographs\Music”. The seller is “inkwellgallery.com” and is located in this country: US. This item can be shipped to United States, Canada, United Kingdom, Denmark, Romania, Slovakia, Bulgaria, Czech Republic, Finland, Hungary, Latvia, Lithuania, Malta, Estonia, Australia, Greece, Portugal, Cyprus, Slovenia, Japan, China, Sweden, Korea, South, Indonesia, Taiwan, South Africa, Thailand, Belgium, France, Hong Kong, Ireland, Netherlands, Poland, Spain, Italy, Germany, Austria, Bahamas, Israel, Mexico, New Zealand, Philippines, Singapore, Switzerland, Norway, Saudi Arabia, United Arab Emirates, Qatar, Kuwait, Bahrain, Croatia, Republic of, Malaysia, Brazil, Chile, Colombia, Costa Rica, Dominican Republic, Panama, Trinidad and Tobago, Guatemala, El Salvador, Honduras, Jamaica, Antigua and Barbuda, Aruba, Belize, Dominica, Grenada, Saint Kitts-Nevis, Saint Lucia, Montserrat, Turks and Caicos Islands, Barbados, Bangladesh, Bermuda, Brunei Darussalam, Bolivia, Ecuador, Egypt, French Guiana, Guernsey, Gibraltar, Guadeloupe, Iceland, Jersey, Jordan, Cambodia, Cayman Islands, Liechtenstein, Sri Lanka, Luxembourg, Monaco, Macau, Martinique, Maldives, Nicaragua, Oman, Peru, Pakistan, Paraguay, Reunion, Vietnam, Uruguay.