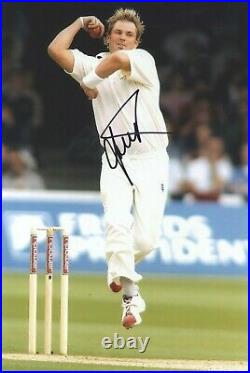 This is an In Person signed Colour 12″ x 8″ photograph by the late Australia Test Cricketer. Shane Keith Warne (13 September 1969 – 4 March 2022) was an Australian cricketer. Who captained the Australian national team. In One Day Internationals. Widely considered one of the greatest bowlers. In cricket history, Warne was named one of the Wisden Cricketers of the Year. In the 1994 Wisden Cricketers’ Almanack. He was the Wisden Leading Cricketer in the World. In 1997 (Notional Winner). He was banned from the sport in 2003 for testing positive for a prohibited substance. Following the ban, he was named Wisden Leading Cricketer in the World for the year 2004 in the 2005 Wisden Cricketers’ Almanack. In 2000, he was selected by a panel of cricket experts as one of the five. Wisden Cricketers of the Century. The only specialist bowler selected in the quintet, and the only one still playing at the time. This item is in the category “Sports Memorabilia\Cricket Memorabilia\Autographs\Signed Photos”. The seller is “writestuffautographs” and is located in this country: GB. This item can be shipped worldwide.