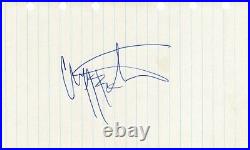 Vintage 6X3.5 lined page signed in bold ballpoint ink by Cliff Burton for private collector Eddie Dawson. Rare in any form. He was an American musician and songwriter who was the bassist for the American heavy metal band Metallica from 1982 until his death in 1986. He performed on Kill’Em All (1983), Ride the Lightning (1984), and Master of Puppets (1986), the band’s first three studio albums. Burton also received a posthumous writing credit on… And Justice for All (1988) for the song “To Live Is to Die”. While touring in 1986 to support Master of Puppets, Burton died following a bus crash in Sweden. A prominent musical influence, Burton placed ninth in a 2011 reader poll from Rolling Stone recognizing the greatest bassists of all time. He was posthumously inducted to the Rock and Roll Hall of Fame as a member of Metallica in 2009. Comes with a full Letter of Authenticity from Todd Mueller Authentics. The item “Cliff Burton- In Person Autograph on a Page- SUPER RARE (Metallica Bassist)” is in sale since Saturday, November 27, 2021. This item is in the category “Collectibles\Autographs\Music”. The seller is “toddmuellerautographs” and is located in Colorado Springs, Colorado. This item can be shipped worldwide.