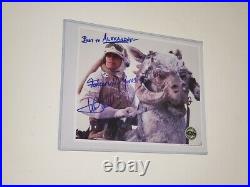 Signed in blue personally by Mark Hamill. This is from my collection of autographs meaning I got it signed myself. This policy applies only to autographs that are stated signed under my supervision. I do not authenticate my items with third party companies since 2014. The items here that are from PSA DNA, James Spence, or Beckett come from mostly top suppliers like the ones listed above. Celebrity autographs vary from time to time and even more so with older stars like Jack Nicholson. Some celebrities like to write something short of a complete signature from time to time. Nicholson is one of those actors who actually does make a complete signature most of the time and is well appreciated by his fans for it. There is a minimal amount of trustworthy autograph sellers around. But in most cases, it is not possible for anyone to tell or prove the authenticity of any signature if not obtained in person. I sell a lot of third party autographs from top suppliers of authentic memorabilia (who rely on PSA DNA, JSA, and Beckett) but I would still say my most premium autographs for sale are the ones I get myself. A Few Questions consistently asked by buyers in past: Did I ever have a actual storefront? In Vermont before I moved, currently working on one here in NJ though my nephew may be in charge of it more than me for now. Did I do photography for celebrities in past? Mostly in New York around Soho area. One of many jobs then. History regarding Collectors Universe? I never work for them, I did own a significant amount of shares (around 5,000) for the company during its early years and had to let go most of them unfortunately after 2001 which was before something called PSA DNA became a part of them. I wish I still had those shares because they are more than six times the value now. Have issues viewing signature or anything else? Have been collecting autographs since 1978. I started collecting near the Regency Hotel in New York where my uncle worked for 11+ years. I do get many items signed under my supervision but they are not graded. However, the autographs already from third parties for sale here come mostly from experienced private collectors like Daniel Cohen and Blake Levine or Top online suppliers like Probstein123. Please feel free to ask questions and I will try to answer them within 48 hours. The item “Star Wars The Empire Strikes Back Mark Hamill signed photo IN PERSON” is in sale since Thursday, January 7, 2021. This item is in the category “Entertainment Memorabilia\Autographs-Original\Movies\Photographs”. The seller is “beautifulcanvases” and is located in Newark, New Jersey. This item can be shipped to United States, Canada, United Kingdom, Denmark, Romania, Slovakia, Bulgaria, Czech republic, Finland, Hungary, Latvia, Lithuania, Malta, Estonia, Australia, Greece, Portugal, Cyprus, Slovenia, Japan, China, Sweden, South Korea, Indonesia, Taiwan, South africa, Thailand, Belgium, France, Hong Kong, Ireland, Netherlands, Poland, Spain, Italy, Germany, Austria, Bahamas, Israel, Mexico, New Zealand, Philippines, Singapore, Switzerland, Norway, Saudi arabia, United arab emirates, Qatar, Kuwait, Bahrain, Croatia, Malaysia, Brazil, Chile, Colombia, Costa rica, Panama, Trinidad and tobago, Guatemala, Honduras, Jamaica, Antigua and barbuda, Aruba, Belize, Dominica, Grenada, Saint kitts and nevis, Saint lucia, Montserrat, Turks and caicos islands, Barbados, Bangladesh, Bermuda, Brunei darussalam, Bolivia, Ecuador, Egypt, French guiana, Guernsey, Gibraltar, Guadeloupe, Iceland, Jersey, Jordan, Cambodia, Cayman islands, Liechtenstein, Sri lanka, Luxembourg, Monaco, Macao, Martinique, Maldives, Nicaragua, Oman, Peru, Pakistan, Paraguay, Reunion, Viet nam, Uruguay.