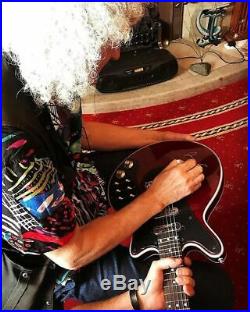 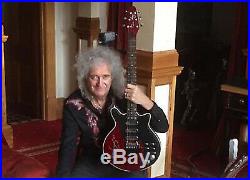 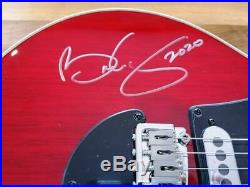 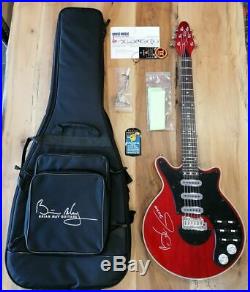 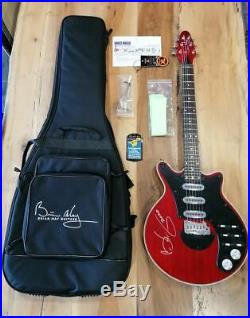 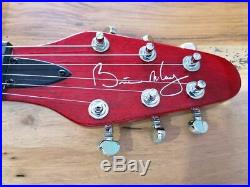 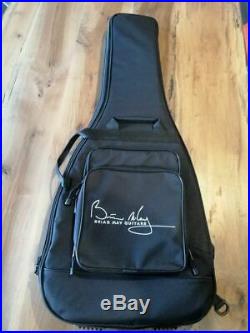 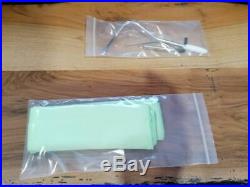 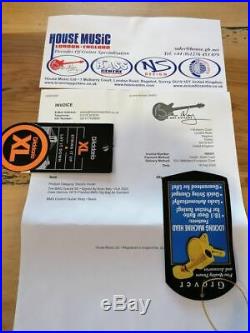 Brian May Red Special. Personally autographed at home! Very rare and highly collectible item! The guitar is absolutely new and never used even for testing. The marks visible on the black part of the body are given by the transparent protective film which must be removed before use. Inspired by the legendary Red Special by Brian May, an instrument that has achieved iconic status and a unique place in rock history, The BMG Special is an extraordinary guitar, with superb build quality, extraordinary playability and a surprising variety of tones. In fact it offers everything you expect from an instrument built to the exacting standards of one of the greatest musicians in the world, but, in line with Brian’s vision of a “guitar for the people”, with an incredibly convenient price that belies his appointments and superior performances. Undoubtedly one of the most anticipated instruments of the century, the original House Music was helmed, the Burns brand, Brian May Signature, which was unleashed in the winter of 2001 to acclaim criticism and the public. In the UK “Guitar Bible”, Guitarist Magazine called it “Best guitar of the year” and theater audiences around the world got excited about the sound of the guitar playing in the famous musical Queen “We Will Rock You”. But the story did not end there. Working with Brian and his old guitar technician, Pete Malandrone, House Music founded Brian May Guitars in 2004 with the launch of a new “Speciale”. With production re-located in one of the world’s most respected instrument production facilities, The BMG Special has seen significant improvements in design, specifications and construction. The subsequent iterations, released in 2006, 2012 and 2017, saw further updates and improvements to the Special bridge assembly, pickups, electronics, hardware, finishes and color choices. Simply put, the best production guitar of the best artist in the world has constantly improved. The BMG Special is an extremely versatile and professional-level instrument designed not only to replicate the unique sound of one of the true heroes of rock’n’ roll, but also to provide modern musicians of all musical persuasions with the perfect guitar for any environment of performance. Mahogany body with acoustic chamber. Lock plate in two pieces. Neck in mahogany set. 24 scale – ebony fretboard with 24 keys. Grover Locking Rotomatic® Tuners. Wilkinson WVP Knife Edge Tremolo Bridge with BM Custom Trem Arm. 3 x BM Brand Tri-Sonic Style, Wired series, single coil pickups. Aluminum “Top-Hat” volume and knobs for tone control. Supplied with BMG customized Gig bag. The item “QUEEN BRIAN MAY BMG Red Special Signed in person autographed guitar ULTRA RARE” is in sale since Monday, August 31, 2020. This item is in the category “Auto e moto\ ricambi e accessori\Moto\ pneumatici e cerchi\Altro pneumatici e cerchi”. The seller is “accessoricustom_original” and is located in napoli, NA. This item can be shipped worldwide.