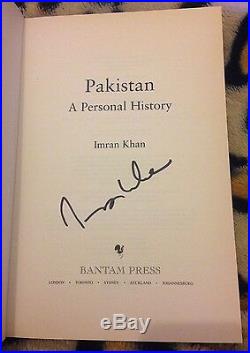 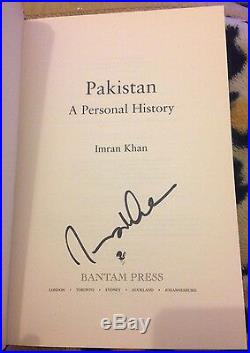 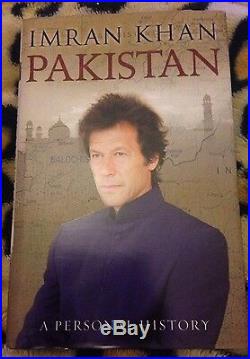 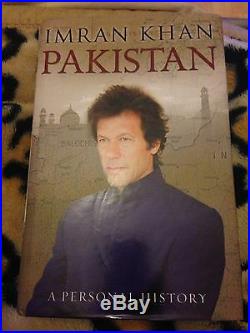 Here is a signed Imran Khan a personal history book that has been signed in black sharpie marker. Pakistan Born only five years after Pakistan was created in 1947, the author has lived his country’s history. This title provides an insider’s view of a country unfamiliar to a western audience. “A must-read for anyone interested in the intrigue of politics in the most dangerous country on earth” (The Sunday Times). “An intelligently written mix of Pakistan’s history and his own autobiography” (Independent). A compelling story, plainly told. It reveals a great deal about Pakistani life and politics, as well as about the great cricketer’s strengths and failings (Spectator). The fascinating story of Pakistan, seen through the eyes of its most famous son, Imran Khan. From the Inside Flap. Born only five years after Pakistan was created in 1947, Imran Khan has lived his country’s history. Now with the revelation that Pakistan has been the hiding place of Osama bin Laden for several years, that relationship can only grow more strained. How did it reach this flashpoint of instability and injustice with such potentially catastrophic results for Pakistan? Recounting his country’s history through the prism of his own memories, Imran Khan starts from its foundation, ripped out of the dying British Raj. He guides us through and comments on subsequent historical developments which shook the Muslim world – the wars with India in 1965 and 1971, the Iranian Revolution of 1979, the Soviet invasion of Afghanistan, the 9/11 terrorist attacks and America’s retribution 10 years later with the assassination of bin Laden – to the current controversial and intractable war in Afghanistan. We see these events viewed not only through the eyes of Westerners, but through those of ordinary Pakistanis. Drawing on the experiences of his own family and his wide travels within his homeland, Pakistan: A Personal History provides a unique insider’s view of a country unfamiliar to a western audience. Woven into this history we see how Imran Khan’s personal life – his happy childhood in Lahore, his Oxford education, his extraordinary cricketing career, his marriage to Jemima Goldsmith, his mother’s influence and that of his Islamic faith – inform both the historical narrative and his current philanthropic and political activities. It is at once absorbing and insightful, casting fresh light upon a country whose culture he believes is largely misunderstood by the West. Imran Khan was born in 1952 and grew up playing cricket in Lahore, Pakistan. He played his first international match for his country in 1971. In 1972, he began his studies at Oxford University, where he was a contemporary of Benazir Bhutto. He went on to play cricket for Pakistan until 1992, and was captain of the team from 1982. In 1994 he established a hospital in Pakistan offering free cancer treatment to the poor and is in the process of setting up a second. He also founded Namal College (2007), the only private sector university outside the cities. In April 1996 Imran Khan established his own political party, the Tehrik-e-Insaf, which aims to bring good governance and social justice to the people of Pakistan, and make Pakistan a just and humane society. The item “IMRAN KHAN SIGNED A PERSONAL HISTORY H/B BOOK SPORT AUTOGRAPH CRICKET POLITICS” is in sale since Friday, April 21, 2017. This item is in the category “Sports Memorabilia\Football Memorabilia\Autographs (Original)\Signed Books”. The seller is “in-person-photos-collectableitems” and is located in LONDON, London. This item can be shipped worldwide.